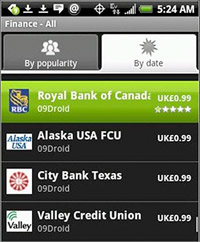 A few security concerns have come to light regarding banking apps on Google’s Android platform.  According to F-Secure, a programmer nicknamed “09Droid” has an excess of 50 mobile banking applications for sale through Google’s Android Marketplace, the Android operating system app store for smartphones.

On Monday Google pulled the apps and several banking firms have issued warnings for their clients to not use them. At this point the security community has not reversed ‘09Droid’s’ banking app, so as far as they know it could just have redirected users to a bank’s website.  But, ‘09Droid’ just as easily could have programmed a code that steals account login information. Quite a few of these apps had sold before Google had a chance to pull them.

This is going to happen since Android apps do not have to go through any approval process that is even close to the process that Apple requires for its apps available through the iPhone App Store.

As a general rule, third-party apps should not be used unless you know without a doubt that it is approved/recommended by your own personal bank. Just to be safe, only download apps that are provided by your financial institution.