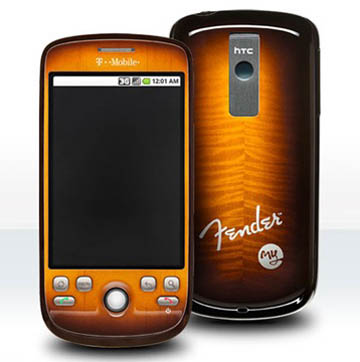 Do you like the Google Android platform, but you also like to rock out on the weekends? It seems that the team at T-Mo have you covered, because here is the extra special T-Mobile myTouch 3G Fender Limited Edition they have just announced. Yes, that’s the same Fender that does guitars.

For me, the Fender name is more associated with my exploits on Guitar Hero and Rock Band, but that blazing design has now hit the mobile arena with this new smartphone. To make things even more interesting, the myTouch 3G Fender Limited Edition comes from a partnership between T-Mobile and Eric Clapton.

Other features include an included 16GB microSD memory card, 3.5mm headset jack and an HTC-developed music player. Naturally, the full slate of Google Android goodness is in full tow too.