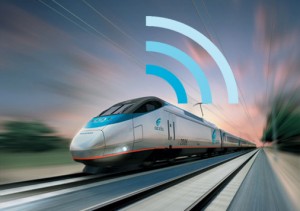 You have some airlines that are already offering in-flight Wi-Fi access, but these new security measures could make air travel a little less appealing that it has been in the past. What if you want to take the train instead? Well, it seems that Amtrak is coming to your web-connected rescue.

From what I can understand, the Wi-Fi connection won’t be offered on every train in the Amtrak network. Instead, they’re giving it a shot on the high-speed Acela line that runs between Boston and Washington DC, including stops in Connecticut, New York, Philadelphia, and Baltimore.

The Wi-Fi service on the Amtrak Acela line will kick in some time in March and, at least initially, Amtrak won’t be charging you an extra penny for this Internet connection. This is a beta thing, though, so the nominal charge will surely kick in at some point.

After the trial run on the Acela line, Amtrak plans on rolling out the Wi-Fi service on other trains all around the country.

I can’t say for sure whether the Greyhound and Amtrak business has picked up in recent weeks due to the increased hassles at the airport, but having the inclusion of on-train Wi-Fi certainly can’t hurt their business either.