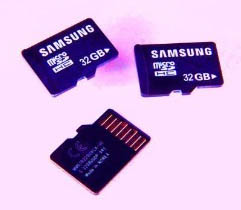 If you have a smartphone like the Nokia E71, then you’ll know that it’s important to have a large enough memory card to store all of your photos, videos, music, and other kinds of content. I have an 8GB microSD card myself, but now I really want to get the first 32GB microSD memory cards from Samsung.

The Korean manufacturer has bumped the bar up to another level for the fingernail-sized format, but these aren’t quite ready to hit the market just yet. Samsung is saying that they are “working” on 32GB memory cards, doubling the highest tier that is currently available at 16GB.

This also represents the final step for the microSDHC format before manufacturers will need to move on to the microSDXC format. For that format, we can expect to see memory cards range from 32GB to 2TB in capacity. Yes, two freaking terabytes. Naturally, that milestone is probably still some time away.

According to Intomobile, the first 32GB microSDHC memory cards should be “commercially available after mass production kicks in around February.” You’ll likely need a firmware update of some kind to accept the higher capacity, as was the case with many of the other capacities along the way.