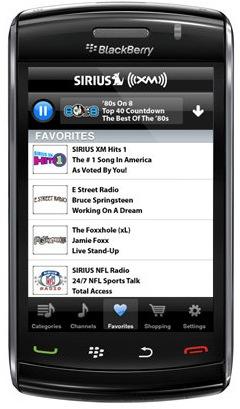 Sirius XM Radio for the Blackberry has been outed. The BlackBerry app hasn’t officially been released yet, the above picture is just a mock-up for conceptual purposes. Initially it will roll out to the BlackBerry Storm 1 – Series 9530 and Storm 2 – Series 9550, the BlackBerry Bold – Series 9000, 9700, the Tour – Series 9630 and Curve – Series 8900, 8520, 8530 handsets that will have the Sirius XM application available.  There will be 120 channels of just about every genre available through the app; the iPhone has the same.

Sirius XM on BlackBerry is reported to be a “mobile extension of the Subscriber’s paid Premium Online Service”.  The application should be made available within a few weeks.