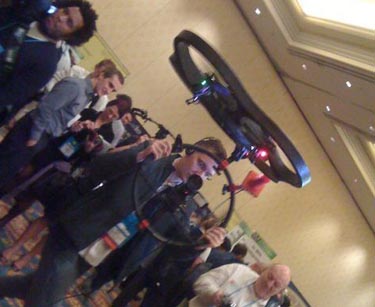 So, Mobile Magazine’s own Jeff Cutler made his way over to CES Unveiled last night and he was bombarded by all sorts of cool technology. One item that drew quite the crowd was an apparent flying saucer. Its airborne nature may have been enough of a draw already, but this flying machine comes with an added surprise.

I didn’t touch down in Las Vegas until after Unveiled was over, but I did catch up with one of the attendees to ask him about this product. Apparently, a company called Parrot has developed this AR Drone with the AR standing for Augmented Reality.

There’s a camera mounted to the front of the AR Drone and this feed is streamed over to your iPhone or iPod touch. Yes, you can use your cell phone to control it and you get a first-person view. What’s even cooler is that you can have an augmented reality dogfight with another AR Drone.

You’ll see your opponent for real through the camera, but you can shoot a virtual missile at him too. There is no physical projectile shot, but if your opponent is “hit” with the virtual one, it takes damage and dips down a little. Cool stuff!

Then again, I have a burning suspicion that the peeping Toms in the audience can come up with a different application for the AR Drone. I’ll leave that up to your imagination.