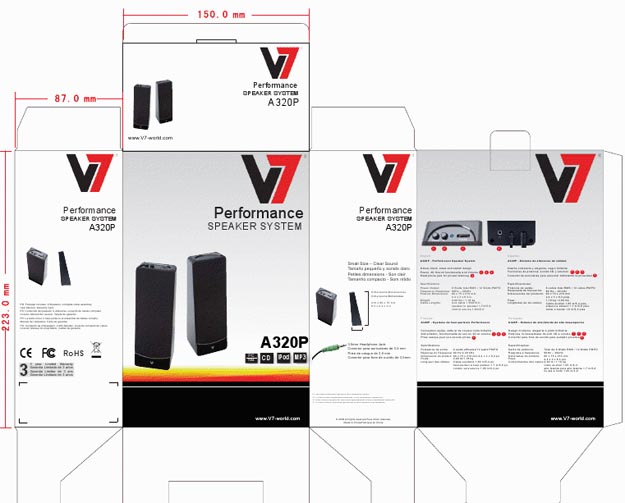 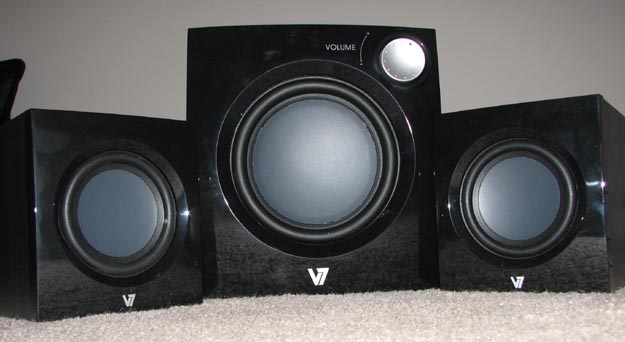 A short while ago, we took a look at the Hercules XPS 2.1 40 Slim Speaker System. It’s a speaker system that can easily be used with your computer, iPod, or any number of other audio sources. Today, we shift our attention to a slightly more affordable option.

The A321P PC Speakers come from V7 by Ingram Micro, the same company that sells the V7 Premium Toploader Laptop Case. That laptop bag is actually a Targus product, but there does not appear to be any Targus branding on this 2.1 multimedia performance speaker system.

Following in the more budget-minded approach of V7, the A321P speaker system does not come in a branded box with any fancy printing or labeling. The retail version might be slightly different from the review unit I received, but I’m assuming that it is much the same. If this it is the case, then the box is just plain white with foam inserts holding the individual pieces in place. 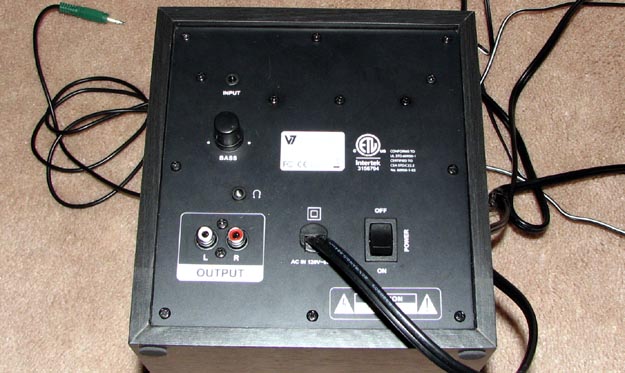 If you’re expecting a plethora of accessories, you will not get what you expect. Inside the box, you get the three speakers and the corresponding cables, but that’s about it. There’s no user manual, but you don’t need one. The connection is about as straightforward as it gets.

Flipping around to the back of the subwoofer, you’ll find the two RCA jacks for output to the two satellite stereo speakers. There’s also a jack for the 3.5mm audio cable (input), a bass control dial, and a power switch.

To control the volume, there is a rather large dial on the front of the subwoofer. It’s a matter of personal preference whether you like having the volume control on the subwoofer or on a wired remote like the Hercules system. I personally like this better, because it means I can use whatever 3.5mm stereo input cable I’d like. 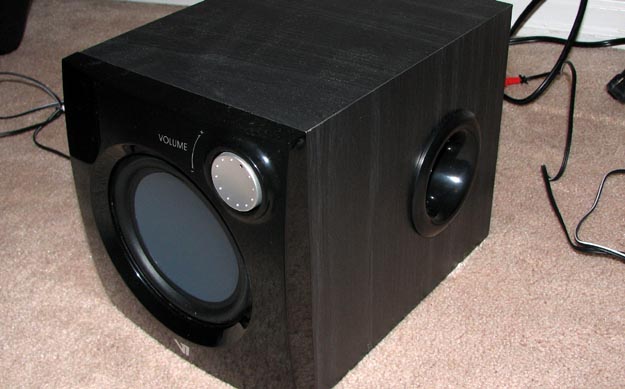 To help with some of that audio production, the subwoofer is ported on the right side. You’ll want to keep this in mind when you think about the speaker placement, since the port should have easy access to the open air. I personally found the provided RCA cables for the satellites to be a little on the short side, but you can overcome this with some cables of your own.

In terms of specifications, the satellites are 9W each and the subwoofer is 12W. The spec sheet says that this results in an overall RMS of 30W (that math doesn’t add up, does it?), so you have a decent amount of output for a relatively compact system.

Build quality is acceptable, using black wood construction and silver accents. I would have liked to see better protection for the speaker cones, however, as they are completely exposed. This may be an issue for the sub especially, since you may kick it accidentally with your foot, assuming the sub is placed underneath your desk on the floor.

For sound quality, I think that the V7 A321P PC Speakers are exactly that: PC speakers. They’re not terrible when you are watching YouTube videos and listening to some soft music, but I experienced a lot of distortion at higher volumes, particularly with anything that had heavier bass notes. 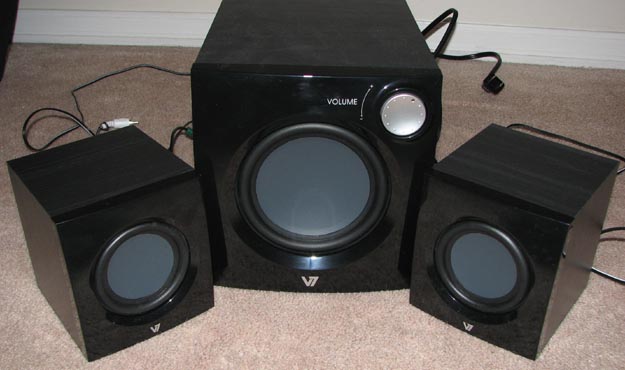 With largely vocal tracks, like Alicia Keys, I wasn’t too disappointed. However, hitting the bass with Kanye West resulted in quite a bit of distortion. I’d suggest keeping the volume a little lower and sticking to lighter playlists if you’re going to use this for music. It’s an upgrade from most speakers built into laptops, but it’s not as good as some other 2.1 offerings.

The V7 A321P PC Speakers carries a manufacturer’s suggested retail price of $45.99, which isn’t terrible for something that has a subwoofer. However, I’d argue that you can achieve better performance at this price point from alternative systems.

UPDATE 01/05/10: I just received an email letting me know that the unit I reviewed was just a sample. The retail version will have full box art and an instruction manual. Sorry for any confusion.

UPDATE 01/07/10: And here is a sample of the box art. It’s a slightly different model, but the box art should be very similar.