A notebook computer is substantially more portable than a desktop computer, but sometimes it just isn’t compact enough. When you want to surf the web from the couch, you may not be inclined to use a smartphone or a laptop and that’s where the Camangi WebStation can come into play.

Michael Smith has been waiting for this thing to arrive for some time, so he was more than happy to tear into it the moment the courier dropped it off at his door. He wasn’t able to get a review copy, so he went out and paid full price ($400) for one.

In terms of first impressions, Smith found the Camangi WebStation to be “sturdy enough.” You only get three physical buttons, since most of what you do is through the Android-based touchscreen interface. Unfortunately, there is no real user manual, so you’ll be left figuring things out on your own.

Total boot took 54 seconds, dragging objects seems to lag, and he found himself “accidentally triggering buttons when trying to scroll.” And this happened a lot, apparently.

In the end, Smith says that the WebStation is “basically a digital picture frame loaded with a cell phone version Google Android with a touch screen.” Ouch. An iSlate this is not. Feel free to click on the link below to read the full review on Gizmodo. 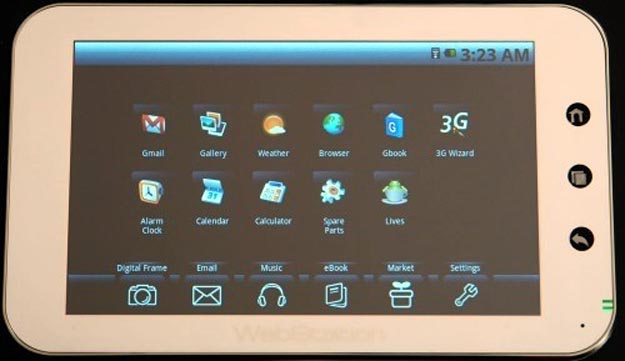