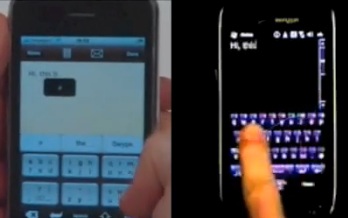 Some people, like me, prefer having a hardware-based QWERTY keyboard, because it feels easier typing out text messages and emails. Other people like the touchscreen interface, but they wish there was something faster than QWERTY or T9. It seemed like Swype may have been the way of the future, but it now has a substantial competitor.

In case you missed it, Swype was a touchscreen keyboard system where you didn’t need to lift your finger off the touchscreen in order to type out the individual letters. Instead, you swiped your finger across the keyboard, connecting the letters together with a virtual string. The software would then figure out what you were trying to write. Your finger movements did not need to be exact.

The new system from a startup called Tiki’Labs is called Tiki’Notes. This text input technology is said to be even faster than Swype and they were quick to post up a video on YouTube to prove this point.

The virtual keyboard with Tiki’Notes is called Tiki6Keys, because it utilizes six oversized keys instead of the usual QWERTY batch of buttons. Whether you can achieve both speed and accuracy with this system, well, that’s up to you to decide.