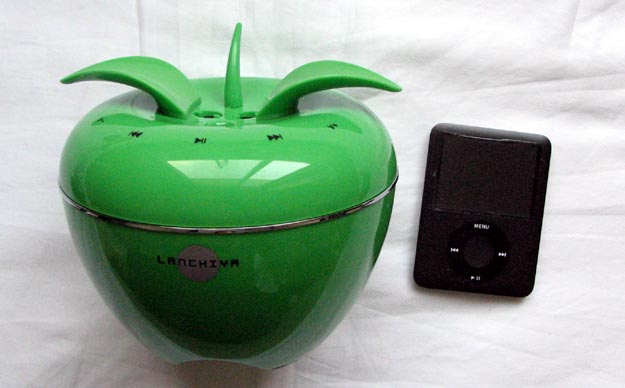 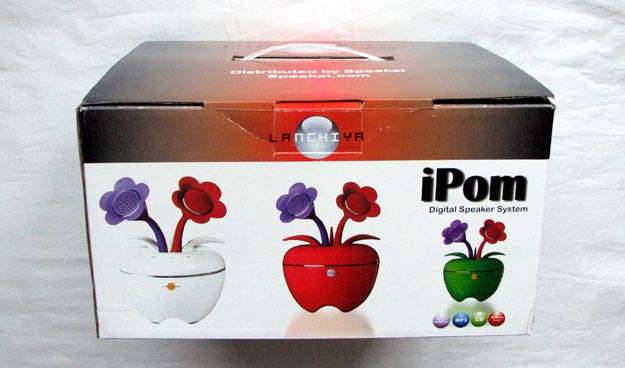 Those crazy kooks at Speakal are back to their old tricks. Not content with right angles and square boxes, the company has always taken a more unique approach to the world of iPod speaker docks. They don’t want a conservative box like the Griffin Amplifi. They want to solicit a cuter response from its customers.

Following in this philosophy is one of the company’s latest creations, the iPom 2.1 stereo speaker system. Unlike the other products in Speakal’s lineup, however, this speaker system does not come with a standard iPod dock on the top. Instead, it is designed to take its musical influence from SD cards and USB memory drives. There’s still a 3.5mm stereo mini-jack in the back, however, so you could pump your iPod-fueled tunes that way instead. 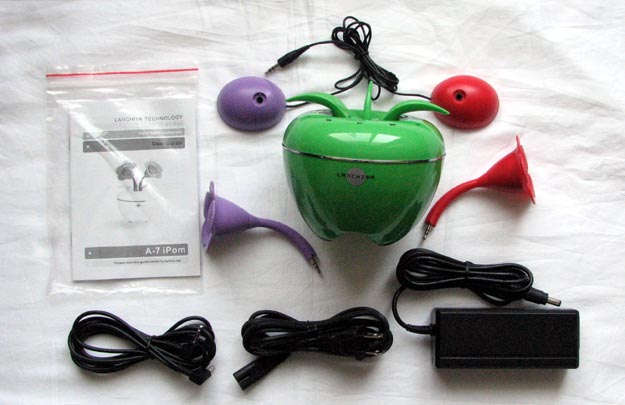 While it is a 2.1 stereo speaker system like the iBoo iPod speaker dock that we saw earlier this year, the iPom comes with a more unique approach to the placement of the speakers. The main unit is shaped like an apple and is available in your choice of green (as shown), red, or white. That’s “normal” enough, given the context.

Where things get a little stranger is when you take a look at the pair of 3-watt stereo speakers. They’re shaped like flowers. I don’t see too many flowers growing out of apples, but that discussion can be saved for another day.

In terms of functionality, you can plug these two flower speakers (red and purple) into the top of the apple or you can use the audio-out port in the back in tandem with the Y-cable base splitter to place the two speakers anywhere you’d like. The 12-watt subwoofer stays downward-firing in the base of the apple. Oh, and I’m sure Speakal had no influence from Cupertino when it came to this particular choice of produce. Right? 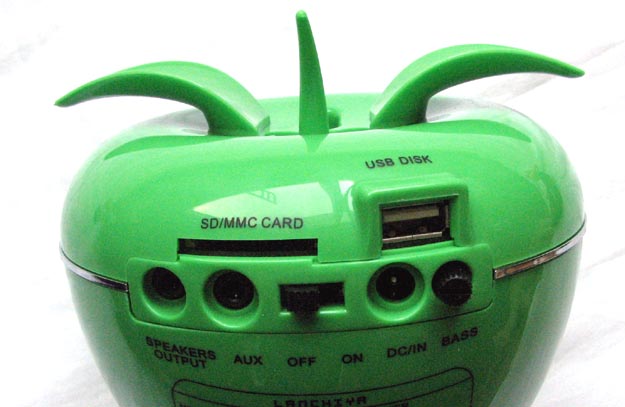 Looking to the back of the iPom, you see the assortment of input options. As mentioned, the primary audio sources are the SD/MMC card slot and the USB port. This makes for a fairly versatile configuration, but you will notice that there is neither a remote nor a display provided with the iPom. You don’t “see” the song that you’re playing, nor can you really navigate through your tracks other than a plain-old previous/next movement.

In this way, the iPom is really meant to be a “set it and forget it” source of music in your life. What I suggest is that you invest in a cheap 1GB memory card or USB flash drive, load it with your tracks, and let the iPom do its thing.

The instruction manual says that you need to place the files in the root directory, but I found that it still played tracks located inside of folders. From what I can gather, it just plays through the songs in order. There is no shuffle option.

In terms of size, the iPom is notably smaller than the Speakal iPig, partly because the stereo speakers are located externally in the aforementioned flowers.

The subwoofer is marginally more powerful than the 9W unit in the iBoo, but the difference in thump is noticeable. Running tunes from my iPod via the 3.5mm stereo input was decent, given the size of the iPom, but when I switched to USB or SD input, I was disappointed.

You start to get a substantial amount of crackle and distortion, even at lower volumes. It’s not nearly as noticeable on mellower songs, like jazz and classical, but anything with a bit of a punch gets crackled. I tried rock and rap, getting the same result. 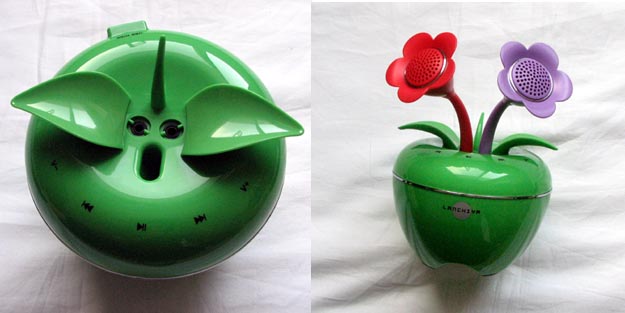 If you’re expecting to get the same kind of sound quality as we enjoyed with something like the mStation 2.1 Stereo Orb, you’re going to be disappointed. The iPom is not meant to blow out your windows or blast your mind. It’s a cute stereo for a bedroom, playing your songs at a more reasonable volume.

Switching between the three audio sources (SD, USB, aux-in) is done by holding the pause/play button for about six seconds, but they could have just as easily included a “source” touch-sensitive “button” to go along with the rest of the controls on the top.

Sound quality left a little something to be desired, especially at the $99.99 price point. The lack of a remote is disheartening too, considering that both the iBoo and iPig came with remotes. As with other Speakal products, there’s no display and no “real” track control either.

The Speakal iPom is a fun little product that may be suitable for a young girl’s room, but you can probably find something better for about the same price elsewhere. I’d recommend the iBoo (at $20 less too) over the iPom.