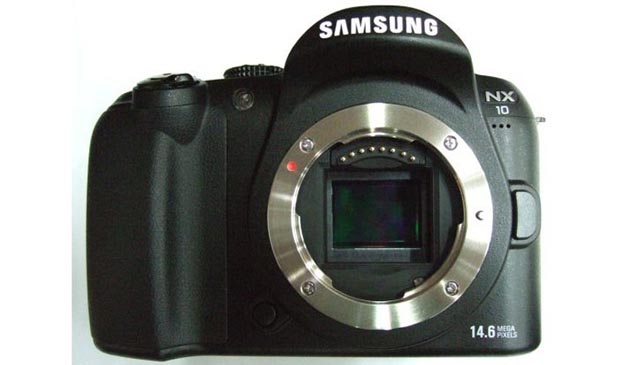 Confused? Allow me to explain. Most people will agree that digital SLRs typically take better pictures than consumer-level point-and-shoot cameras, but most people will also agree that the P&S is a lot easier to carry around that a huge honking SLR. How can you reconcile these concerns?

Samsung has apparently come up with its own proprietary solution. We first heard about the “hybrid” camera from Samsung some time back at PMA, but now the Samsung NX10 is official and ready to go. In a nutshell, you get a camera that isn’t nearly as large as a conventional SLR, but it’s supposed to provide SLR-like quality.

How? Well, it’s a “hybrid” camera. It comes equipped with a “real” SLR sensor, but it does not actually have the single-lens reflex from which full-blown SLRs get their name. Instead, it’s more akin to the Micro Four-Thirds format. It also boasts 14.6 megapixels of high resolution goodness.

What may make it less appealing to some shutterbugs is its proprietary format. The lenses that you buy for the NX10 will not work with other cameras, whereas the Four-Thirds format has several manufacturers on board. On the bright side, it’ll reportedly come bundled with an 18-55mm lens and it’ll shoot at up to 7 frames per second.