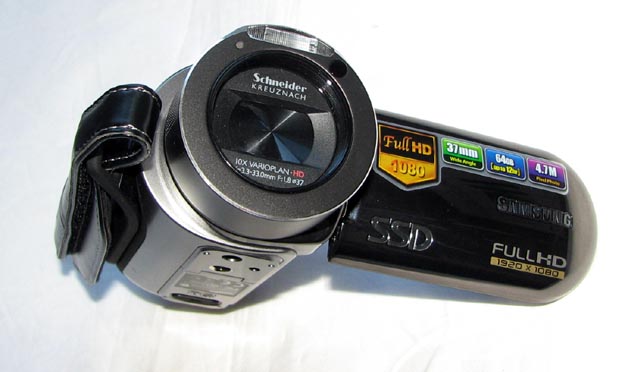 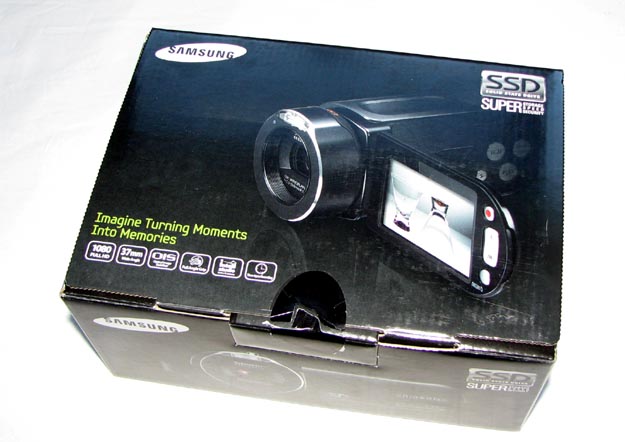 If a picture is worth a thousand words, then a high-definition video has got to be worth millions. There are some pocket camcorders out there that are capable of recording HD video, but very few can truly measure up to their more expensive counterparts.

One of the most powerful (and correspondingly expensive) consumer-level HD camcorders today is the Samsung HMX-H106. This is certainly a big step up from the $200 Flip UltraHD, to be sure, but you get a lot more out of this movie-making wonder too.

Easily the biggest claim to fame for the Samsung HMX-H106 is that it’s the world’s first SSD camcorder. It comes equipped with an impressive 64GB solid state drive, providing you plenty of space to store those full HD videos. If you want to save some money, there are variants available with 32GB or 16GB SSDs, as well as one that uses flash memory cards only. 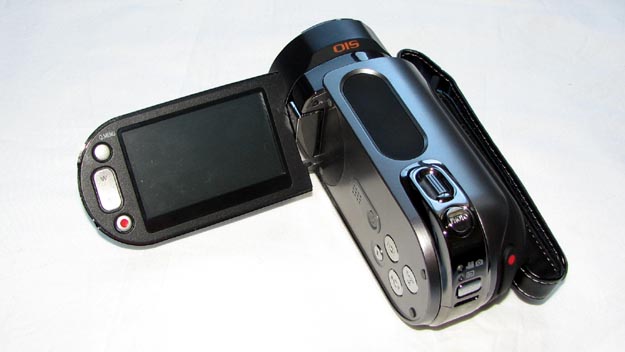 It doesn’t have the WiFi or Bluetooth found in the Samsung ST1000 digital camera, so all of you connectivity will have to be done with an actual cable. It connects to your computer via USB or to your television using the provided component cables. It also boasts mini-HDMI for good measure. 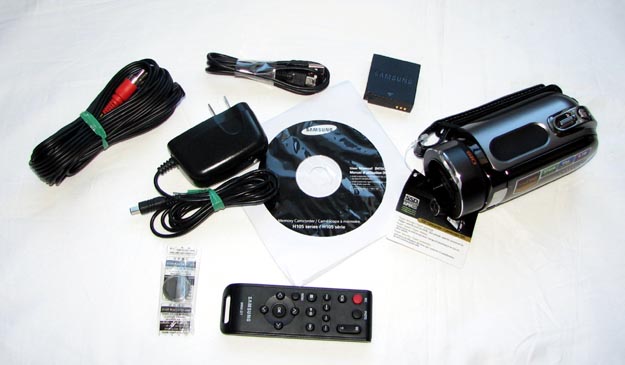 Cracking open the box, we find the camcorder itself, along with the user manual on CD, the included battery, a USB cable, wall charger, component video cables, and a wireless remote.

Since the HMX-H106 comes with a 64GB solid state drive, you probably don’t need to deal with any memory cards for even more storage. It’s too bad that you don’t get a mini-HDMI cable. There isn’t any kind of carrying pouch either.

Generally speaking, I’m pretty happy with the overall design of this camcorder. It’s comfortable to use, giving you quick access to most of the controls using your thumb and index finger on your right hand. It’s not very lefty-friendly at all, but that’s par for the course.

From the back of the camcorder, you can easily hit the photo button, press the video record button, or move the zoom rocker. The zoom speed can be adjusted based on how much you tilt it, but it can be a challenge to get a smooth zoom. Alternatively, you can use the record and zoom controls next to the touchscreen.

The user interface remains much the same as every other camcorder from Samsung. The touchscreen layout is easy enough to understand, letting you adjust the settings and preferences as you see fit.

Unfortunately, the touchscreen isn’t quite as responsive as it could be and I found myself having to press some “buttons” more than once before it’d register. On the bright side, the on-screen buttons are large enough to be finger-friendly.

So, how’s the quality. When taking still photos, the quality is about on par with a decently-equipped consumer point-and-shoot digital camera. It wasn’t quite as good under lower light conditions and the flash can really wash out a scene, but that’s a problem that plagues a lot of consumer cameras.

Here is a sample picture that I took outside on a reasonably sunny day: 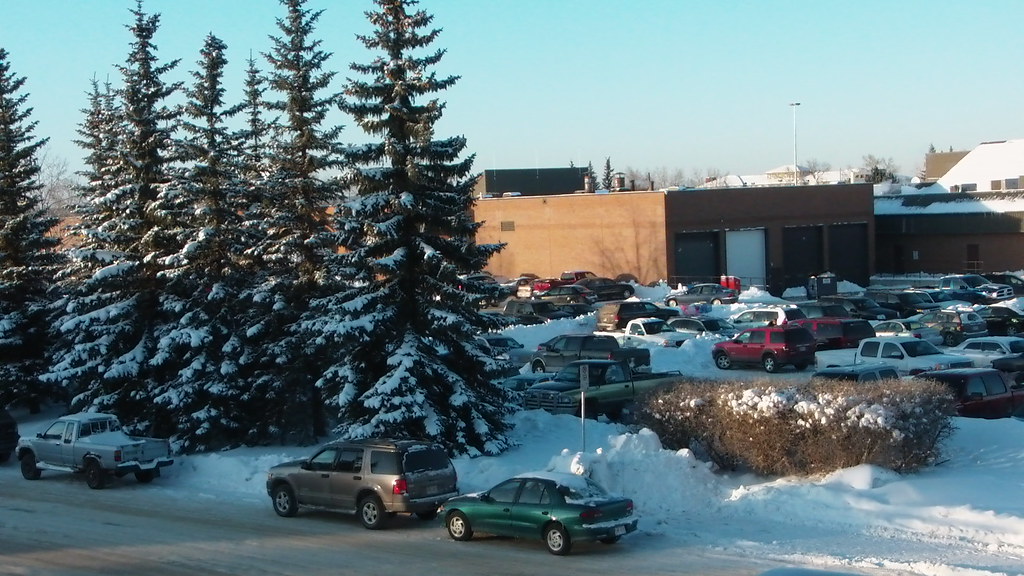 You can also seen the up-close sample that I took with indoor lighting conditions. It seemed to have more trouble with macro-level focus, but it was able to grab focus eventually.

For video, I shot at the maximum 1920×1080 HD resolution, but YouTube breaks that down some with its compression. You can see the sample video embedded below.

Considering that the Samsung HMX-H106 carries an MSRP of $899.99 (you can find it for about $600-$700 online), I expected incredible video quality. While it’s not bad by any stretch of the imagination, it’s not really four times better than cheaper camcorders.

Unless you are really bent on the 64GB solid state drive, you may be better off with the Samsung HMX-H100. It has no internal memory and takes SDHC cards, but it is also several hundred dollars cheaper than the HMX-H106. Buy some SDHC cards on the cheap and you effectively have the same thing. You can also look into the 16GB H104 and 32GB H105.

Samsung has really made a name for itself in recent years, combining fashion with function, style with utility. The Samsung HMX-H106 is certainly a decent camcorder and it can take 1080i HD video with the best of them. However, the real selling point has to be the huge 64GB solid state drive.

This bumps the price into a range that makes it harder to justify. The focus can be on the slow side and the touchscreen isn’t as responsive as it could be. The video quality is good, but it’s not great enough to justify the higher price either.

If the H106 were a lot less expensive, I may be willing to overlook some of its shortcomings. As it stands, you’ll probably want to save some money and take one of the cheaper brothers of the H106 instead. 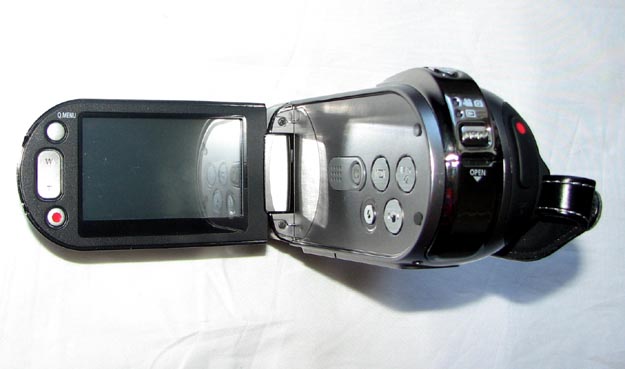 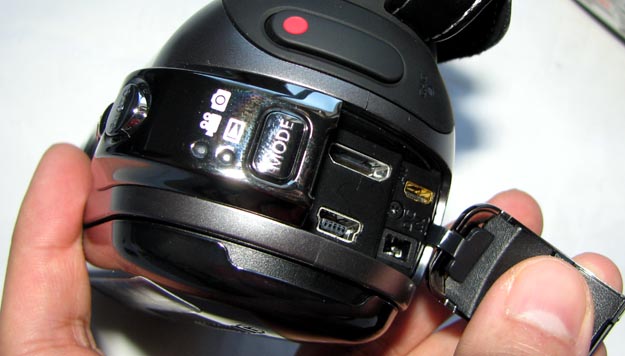