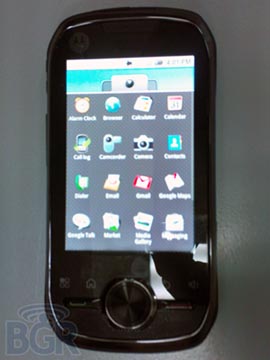 Motorola seems to be making quite the Android-flavored splash with its Motorola DROID smartphone through Verizon, so I guess they wanted to expand on that Android-fueled success with another handset. iDEN could be the way to go, since there isn’t as much competition there than with “regular” consumer feature phones.

The phone hasn’t been officially announced just yet, but we have managed to find some juicy specs that have been leaked in the meantime. The Opus One will get Android 1.5, but with iDEN service enhancements.

Since it’s iDEN, we’re expecting to see this with Sprint/Nextel. When and how much are anyone’s guess.