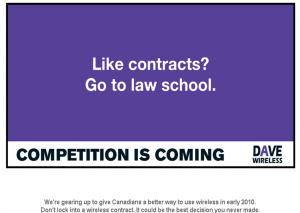 The wireless climate in Canada is abuzz this week with the launch of Wind Mobile, finally offering some real competition to the “big three” wireless providers. What about that other guy that won a bunch of spectrum during the auction? Oh, he’s coming. And soon.

While Wind Mobile is rolling out its services across major metropolitan areas in Canada, it seems that DAVE Wireless is poised to enter the marketplace in early 2010. No specific date has been provided as of yet, but it sounds like we’ll be getting loaded with DAVE in the Spring.

DAVE Wireless has been “quietly prepping” its HSPA network and company president Dave Dobbin says that they are “on track to bring competition to Canadian wireless consumers in early 2010 with our state-of-the-art Ericsson 3G network.”

Whereas Wind was only able to launch in Calgary and Toronto initially, DAVE will be launching in Vancouver, Edmonton, and Ottawa as well. Nothing has been released regarding plans or devices, but you can expect DAVE to be competitive.