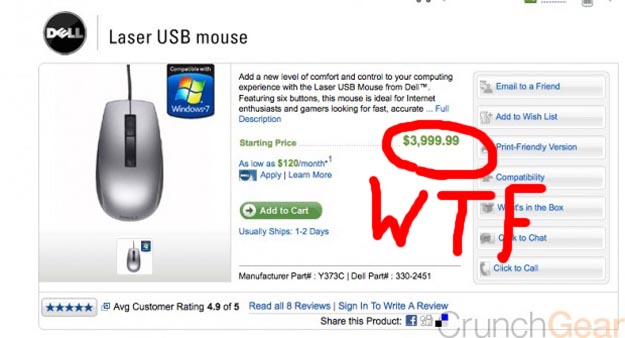 Nothing quite says happy holidays like receiving a pink slip from your boss. The recession seems to have hit Dell pretty hard. The company has already dropped out of second place among worldwide computer makers, giving that honor to Acer instead. Hit with hard times, Dell is preparing some layoffs and, well, the employees don’t seem very happy about it.

More specifically, we’re hearing that 700 of Dell’s 4500 employees will be laid off by June 2010. That’s about 15% of its workforce, so this is no small downsizing. And I’m guessing that some of the early layoffs have to do with the people who maintain the website.

If you go over to the Dell website, you’ll find that it is currently absolutely riddled with price erros. You can see the rather basic-looking laser USB mouse shown here selling for the astronomical price of $3,999.99.

On the flip side, an incredible Xeon E3110 machine is being listed at a mere $16.99. There’s also a 3.2GHz computer going around for $10.99. Don’t expect Dell to honor these rock bottom prices, but they might gladly take your four grand for that mouse.

Do you think these price errors are thanks to some disgrunted ex-employees? Seeing how many of these errors have yet to be fixed, that’s a very real possibility.