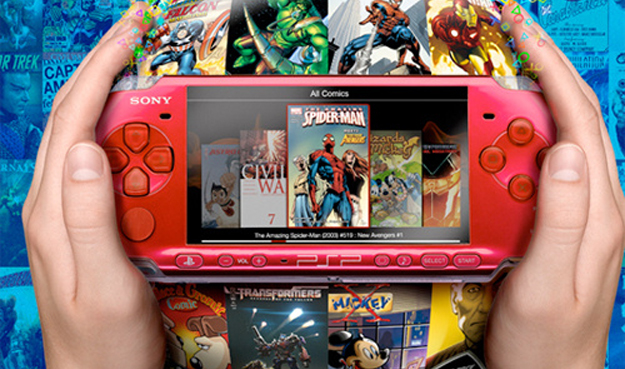 It was promised several months ago that the Sony PSP would get loaded with a huge array of digital comic books and now that promise is finally coming to fruition. In between sessions of Little Big Planet, you can peruse through everything from Iron Man to the Incredible Hulk on your favorite Sony handheld.

The PlayStation Network has just launched its Digital Comics service. This comes from a partnership between Sony and Marvel, giving users the ability to download classic Marvel comics for as little as 99 cents. It’s not quite the same as getting an e-book, but you do get full color on that glorious PSP screen.

It isn’t just Marvel that’s doing the digital comic book thing on the Sony PSP either. The service is also being supported by Disney, IDW Publishing, and iVerse Media, among others. This means taht you can go beyond the X-Men and dive into the Transformers and Archie too.

There are 550 comics available as of today and this number will surely grow as the service grows and matures. You can download the comics directly to your PSP over Wi-Fi or you can use your PC to transfer the files.