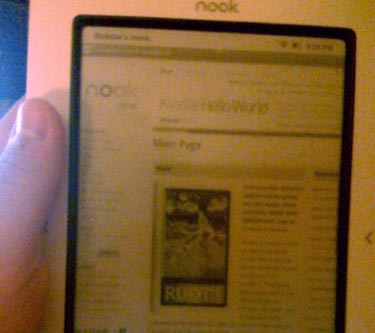 When I was interviewed by Joseph Planta of The Commentary, we had a brief discussion about the world of ebook readers and whether these devices would really replace the “dead tree edition” books in the near future. Sean Cranbury chimed in saying that he wouldn’t buy one until they were multi-purpose and multi-function.

Well, it seems like that day could be coming sooner than we expected. If you happen to be one of the lucky few to buy a Barnes & Noble Nook this year, you’ll find that it can do more than show you some books in digital format. It can also surf the web.

This is far from official support from the Barnes & Noble people, but the kooks at NookDevs have managed to get a full browser up and running on the ebook reader. It’s still in black-and-white, but it means that you browse through your favorite websites on this thing.

Further still, it seems that NookDevs has managed to install Android-based apps for Twitter and Facebook too. Aside from the slower refresh rate, you could almost say that the Nook is a viable tablet. Sort of.

Is this a glimpse into what we’ll see with the Apple Tablet? Maybe.