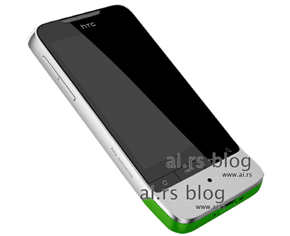 If you think about the naming scheme for HTC smartphones as some sort of ladder or hierarchy, then what kind of name would you give to a phone that is higher than a Hero? How can a Hero be more heroic? It seems the answer coming out of Taiwan is the HTC Legend, a phone that looks similar to its predecessor, but improves upon it in just about every way.

This is one of the first clear shots that we see of the HTC Legend. It still carries the characteristic “chin” of the HTC Android phone lineup, but this chin seems a little less Leno-like that previous offerings. There is no slide-out keyboard, so you’ll be using the touchscreen for almost everything.

Speaking of the touchscreen, one of the first major upgrades is that 3.2-inch HVGA AMOLED capacitive touchscreen display. Running through the specs, we also discover a metal chassis, the elimination of the trackball, and the addition of a flash for the 5.0-megapixel camera. For performance, the HTC Legend also gets a faster processor compared to the Hero.

No official announcement has been made, as far as I know, but I have heard some rumblings pointing toward a release in March 2010. Your guess is as good as mine when it comes to which carriers will snatch this up.