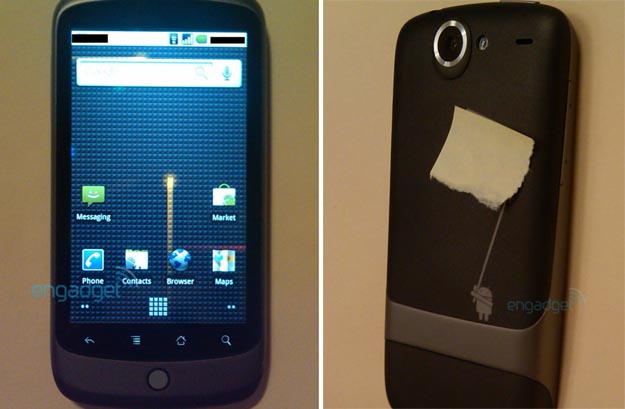 Yes, Google Android has been around for a little while now and we’re starting to see the floodgates open up to reveal all sorts of handsets based on the platform. That’s one thing. It’s another thing altogether to get the so-called official Google Phone and it seems that we are getting our first look at this handset. Behold the Nexus One.

What you see here is what we believe to be the first real Google Phone. The Nexus One looks really similar to something else that you may have seen and for good reason; the Nexus One will apparently be build by HTC, a company that has already produced its fair share of Google Android smartphones.

There is an updated OS here with 3D elements in the app tray, and it seem that you get “an extended amount of homescreens” too. I could be wrong, but this is starting to sound a little much like the HTC Hero, except with a slightly different skin. There’s also a webOS-like feature in that if you press that grid-looking thing at the bottom, you bring up a card-style preview of all the home screens.

Based on these images, we can see the Nexus One will indeed get Wi-Fi and it seems to be connected to T-Mobile. It’ll probably come with Google Googles and Google Navigation too. There is no obvious HTC branding, but that’s who’s making the phone.

There’s no official word on price, release date, or even a formal announcement, so we’ll all just play this one by ear. Realistically, the Nexus One Google Phone is really no more exciting than the HTC Hero or Motorola Droid, is it?