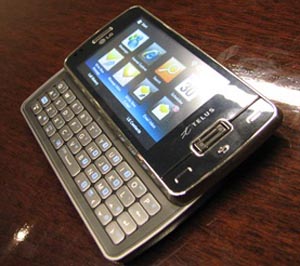 Maybe you like the iPhone 3GS. Maybe you like the HTC Hero. Well, Telus Mobility has another smartphone for you to consider and it has some crazy features that you’ll have a hard time finding anywhere else. There’s a reason why it’s called the LG IQ, because this handset is meant to be pretty darn smart.

Does this phone look familiar to you? That’s because the LG IQ from Telus is basically a rebranded version of the LG eXpo, which recently made its presence known south of the border with AT&T. It may look like another one of these standard touchscreen phones with a slide-out QWERTY keyboard, but it’s got some other highlights that might pique your interest.

The LG IQ gets loaded up with Windows Mobile 6.5 and the whole thing runs on a peppy 1 GHz processor. There’s also a fingerprint sensor, a projector attachment, and the usual suite of productivity and messaging software to keep you connected with the world at large. It’s part of the new HSPA lineup from Telus too, so you’ll get a snappy connection while you’re at it.

The LG eXpo goes for about $200 on a two-year contract with AT&T, but Telus Mobility is willing to sell it for just $99.99. The catch is that they want a three-year contract, as is par for the course in Canada.