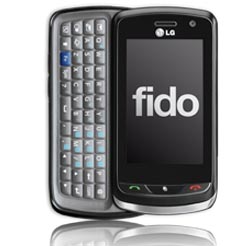 With the noted exception of the Apple iPhone 3G and 3GS, the Fido brand is largely known for being a budget-oriented place for people who need basic cell phones. The current selection isn’t the most exciting thing in the world, so it’s good to see a decent phone join the mix. Here is the LG Xenon.

While the touchscreen display and slide-out QWERTY keyboard are reminiscent of the LG Neon, which is also available through Fido, the LG Xenon is a little more substantial both in stature and features.

It’s not quite a true smartphone, but you do get a widgetized home screen that you can customize as you see fit. It also has a built-in web browser, email client, IM client, quick access to Facebook, and threaded SMS. Other highlights include a 2.0MP camera, MP3 player, stereo Bluetooth, and microSD expansion.

Find the LG Xenon at your favorite Fido retailer for $75 with a two-year Fido agreement. Alternatively, you can find the same phone over at Rogers where they’re also selling a blue version.