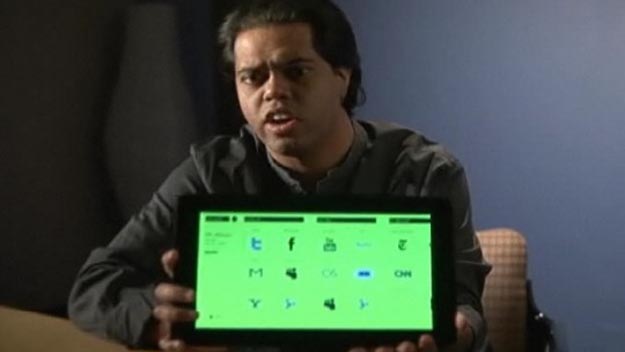 And so the saga continues. Late last month, we read a post from TechCrunch’s Michael Arrington telling us that the CrunchPad is dead. He says that he has effectively been screwed by Fusion Garage and that his team will no longer be participating in the product’s development and release. Well, it didn’t take long for Fusion Garage to jump into the marketplace, because we are now looking at the launch of what we once knew as the CrunchPad.

I like the CrunchPad name, but I guess Fusion Garage wanted to minimize its former relationship with TechCrunch and Michael Arrington. As such, we are now looking at the Friday release of the, get this, Fusion Garage JooJoo. Yes, JooJoo is a fantastic name for a serious tablet. </sarcasm>

You can see the CrunchPad JooJoo being held here by who I think is Chandra Rathakrishnan. It gets a 12.1-inch capacitive touchscreen and a web-centric operating system. It weighs in at 1.1kg, but Chandra isn’t quick to reveal any of the remaining specs or features.

Even though the JooJoo will go on sale this Friday, the tablet will not start shipping to customers for another eight to ten weeks. You’ll also have to open your wallet a little wider, since the $100 $200 $300 price tag has been nixed in favor of a $499 asking price.