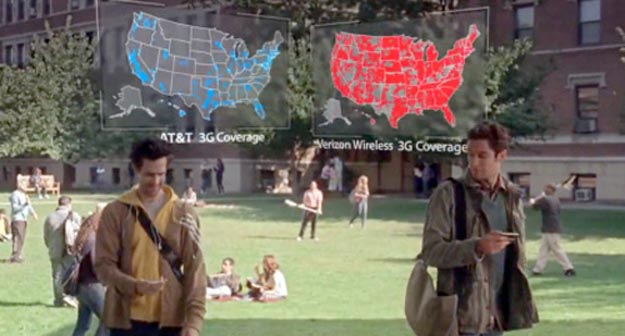 Here’s something we don’t see every day. Under normal circumstances, the different wireless carriers in the United States would be at each other’s throats, constantly looking for ways to lure customers away from the competition and into their fold. We’ve seen some mighty battles between Verizon and AT&T, but this action has escalated in recent month.

As you already know, Verizon Wireless started their “There’s a Map for That” ad campaign, directly attacking the lack of 3G coverage that AT&T has. This implied that customers would get better 3G coverage and service with Verizon than they would with AT&T.

More recently, we’ve seen the ad where the Apple iPhone joins the land of misfit toys, again showing its utter lack of coverage on the AT&T network compared to what you’d be able to get with Verizon. And then AT&T fought back with some Luke Wilson-fueled ads and Apple backed them up by saying that “other networks” don’t let you use voice and data at the same time.

The net result of these attack ads on both sides of the fence is that they both started suing one another. AT&T says that Verizon’s ads are misleading and then Verizon said the same about AT&T’s commercials.

While it’s not clear what will become of all these commercials, it has been decreed that AT&T and Verizon will stop suing one another over the “Map for That” campaign. I guess they’ll need to come up with a new tag line?