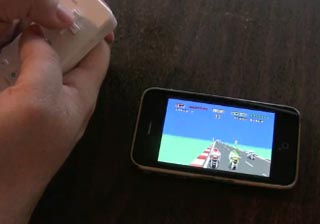 I think many of us would agree that the Apple iPhone has become not only a viable mobile gaming platform, but also a very popular one. Even so, some people may not be completely in love with touchscreen-only controls nor may they be satisfied with just what’s available in the App Store. Well, this little tweak seems to be address both of these issues.

Are you ready for one crazy triumvirate? In the video below, you can watch as the Apple iPhone is used to run the MAME emulator to play some classic games. To make matters even more interesting, the controls for the MAME are coming by way of a Nintendo Wii Remote.

Even though it may seem like proprietary technology, the Wii Remote is really working off a Bluetooth connection. That’s why people have been able to make hacks that allow the Wii Remote to control a Roomba vacuum, for example.

This MAME-gaming Wii Remote-wielding is a part of the BTStack project and this latest development comes by way of ZodTTD. At this point, it’s just a proof of concept, but here’s hoping that mame4iPhone (along with the Wii Remote compatibility) get released soon.