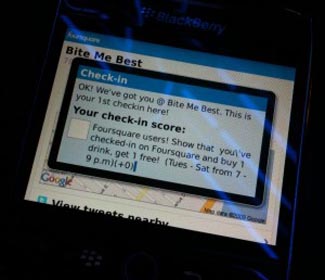 People who think that Facebook and Twitter are creepy enough already might nto really approve of the near stalker-like possibilities of Foursquare. In effect, Foursquare is a location-based social network where users “check in” to locations, showing where they’ve been and where they are. The person who “checks in” at a location the most becomes that location’s “mayor.”

The Foursquare thing is catching on with Android and iPhone users already, but those loyal to Research in Motion have been left out in the cold up until now. That’s change with the release of a new BlackBerry app that works with Foursquare. Collect those points!

The other added advantage to using Foursquare is that you can sometimes come across some free bonuses. For example, in the screenshot above, you can see that the user checked in at Bite Me Best and landed himself a two-for-one drink coupon as a result.

The Foursquare app for BlackBerry isn’t quite ready for public consumption just yet, but the plans are calling for an “early December” release.