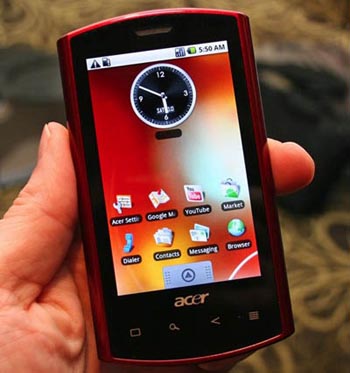 Even though HTC got the clear head start on the Android thing, it seems that a lot of other companies are finally getting in on the Google smartphone action. We already know about the Motorola Droid, among others, but now we are getting our hands on the Acer A1 Liquid, the first Android phone from the Taiwanese company.

Most of us know Acer better for its notebooks and netbooks, but they have a small lineup of Windows Mobile handsets already. They’re not completely new to the smartphone game, so the move to Google Android was a natural one.

The Acer A1 Liquid was first unveiled last month, but they are saying that the touchscreen-equipped phone is ready for shipping this week. Seeing how today is Friday, I’m a little skeptical about the “this week” part of the announcement, but I suppose we can assume it means “really soon.”

For specs, you get that super fast 1GHz processor, a 3.5-inch WVGA touchscreen display, 5-megapixel camera, aGPS, and 3.5mm headphone jack. Acer hopes to move up to a 6-7% smartphone market share in the next three to five years.