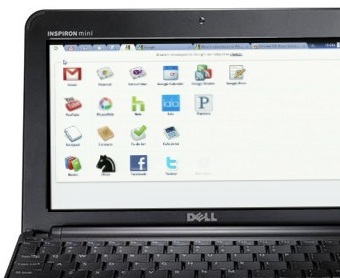 Many people will tell you that the Dell Inspiron Mini is one of the best Hackintosh candidates on the market, especially since Apple doesn’t produce a netbook of its own. As it turns out, Dell’s little machine plays quite well with Chrome OS too, thanks to a little help from a Dell technologist.

This is the same netbook that was demonstrated with Google Android too, if I recall correctly, so it seems that Dell has all the right parts to handle nearly any operating system that you throw at it. This custom build of Chrome OS for the Dell Mini 10V isn’t quite perfect, but it’s getting there.

Based on the information provided, Chrome OS will still give you a near instant-boot experience on the Dell Inspiron Mini, but it won’t be exactly functional for a few minutes. That’s because of a rather notable Wi-Fi deficiency.

In short, the machine tends to take between five to ten minutes before it starts finding and recognizing your wireless access points. Seeing how Chrome OS needs to be online to do anything (unless there is some hidden Gears support in the works), you really can’t do anything until you connect to the web.