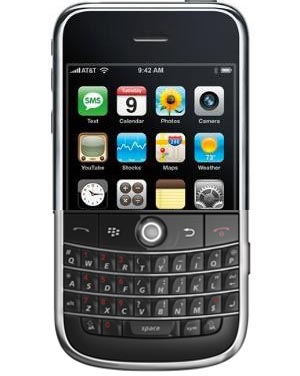 When I talk to a number of my friends who own an Apple iPhone, they say that they are perfectly satisfied with the touchscreen experience and they are not at all interested in gaining a physical keyboard like what I have with my Nokia. However, it turns out that not all iPhone owners are quite so black-and-white when it comes to hardware keyboards.

Strategy Analytics recently commissioned a survey and found that half of all iPhone users have a “strong interest” in having a physical keyboard on their cell phones. This flies in the face of the touchscreen-only experience touted by what I thought were most iPhone owners.

The sample size for the survey was fairly substantial at 2,500 users and it crossed borders by asking users in both the United States and Western Europe. It’s not like iPhone users are willing to give up the touchscreen just yet, but a good number say that they want to combine the touchscreen with a hardware keyboard.

I suppose iPhone owners could try to get the best of both worlds by taking on something like the HTC Touch Pro2 or the Nokia N97, but they want the Apple part of the equation too. Will Apple make a touchscreen slider for the fourth-gen iPhone? Somehow, I doubt it.