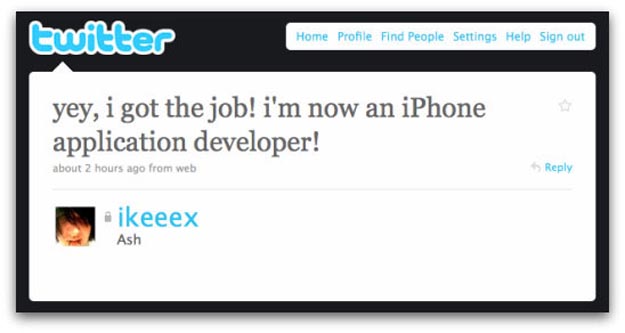 Earlier this month, the Apple iPhone got hit with its first worm. The infection was benign and only affected Australian jailbroken handsets, but it demonstrated a security flaw by never giving you up and never letting you down. Well, it turns out that it pays to Rick Roll the world.

The creator of the first iPhone worm, as you may recall, is a 21-year-old student from Sydney and he did it just to poke fun and to show what was possible with the popular Apple touchscreen phone. His efforts were so impressive that a development firm has offered him a job.

Ashley Towns will be joining a company called mogeneration and he’ll be working as an iPhone application developer for the firm. There is no specific word as to how much Ashley will be earning, but this is still a great job for a college kid.

You may not be familiar with the mogeneration brand, but the company has already produced a range of iPhone apps like Lingopal, Xumii and Moo Shake! Interestingly, Ashley has not received any punishment for his worm-filled actions thus far and he isn’t expressing any regret for the hassle that he caused.