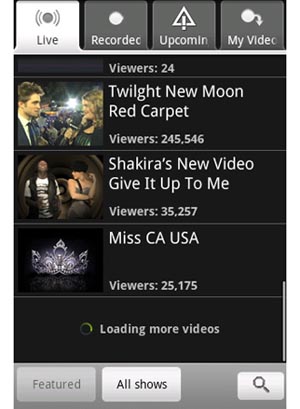 The lines that used to separate what a smartphone could do from what a laptop could do are getting blurrier by the day and we’ve reached another major milestone. For all the Google Android users in the audience, you now have the opportunity to watch your favorite streaming videos from UStream thanks to the release of a new Android app.

If you have a Google Android smartphone, then you may have already known about the UStream Broadcaster app that was released back in September. This app worked much the same way as the functionality of Qik, allowing you to stream video from your phone’s camera onto the web. With today’s announcement, the reverse is true.

The appropriately named Ustream Viewer is designed to let you watch anything that has been posted or is currently streaming on the popular website. This includes both recorded clips and live feeds, and you can use either a 3G or a Wi-Fi connection to do it.

Naturally, you’ll want to make sure that you have a suitably large data plan to handle all that broadcasting and streaming video from your Android phone. You’d hate to end up with a massively unaffordable bill, after all.