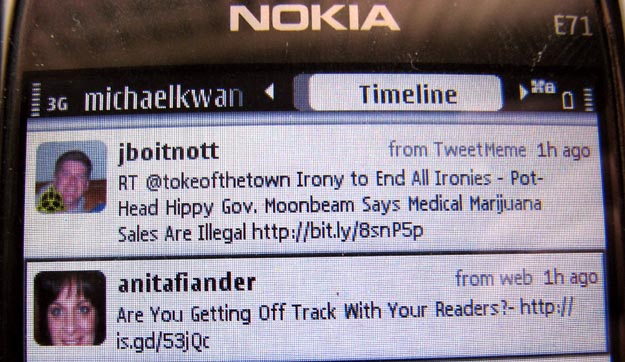 Unless you’ve been living under a rock for the last couple of years, you’ve probably heard of the Twitter microblogging phenomenon. While you could just stick to desktop applications and maybe SMS functionality, you can get a lot more out of Twitter with the appropriate mobile app for your smartphone.

There are all sorts of possibilities for the BlackBerry, Android, and iPhone users in the audience, but it seems that the Symbian S60 platform has been largely ignored by the Twitter community. For the longest time, I used TinyTwitter on my Nokia E71 smartphone, but it left a lot to be desired. The interface was clunky, it made my phone freeze upon occasion, and it had very little support for extra Twitter features like retweeting. I wanted more and then I found it.

Available for both S60 v3 and S60 v5, Gravity could be one of the most powerful Twitter clients for S60 smartphones. This includes the vast majority of Nokia E-series and N-series smartphones, but you should get it to work on other S60 phones too. There is a fully functional free trial if you want to check it out before buying.

Unlike TinyTwitter, Gravity supports multiple Twitter (and Laconica) accounts. These are all accessed from the main screen of Gravity, as you can see in the screenshot above. I have my main account and my side account shown there.

It’s also very nice that you don’t have to go into a dedicated tweet screen in order to post a Twitter update. As long as you are within one of the pages of your account, you can just start typing your new tweet to send it out. This is very convenient.

Given the smaller screen of a smartphone, you couldn’t possibly get the multiple column view that you’d get with something like Seesmic Desktop or TweetDeck. However, Gravity for S60 still brings the same idea as columns to the handheld arena.

You can see the different “tabs” at the top of the page; you press left and right on your d-pad to move between them. These tabs show the main timeline, your replies, your direct messages, your own tweets, and your friend list.

Better still, you can create your own custom “groups” just like you would with TweetDeck. If you think that you need an iPhone to have this kind of Twitter functionality, think again. You can do searches as well.

Just about anything that you’d want to do with Twitter can be done with Gravity. You can check the timelines of specific users, track conversations, preview TwitPic images (among other services), send out a retweet, and more.

The performance will vary depending on your specific handset, but I was quite pleased with the speed on my Nokia E71. Even though it is much more graphically rich than TinyTwitter, I found Gravity to be much smoother and it never “hung” while performing any action. My phone never froze either, which happened not infrequently with TinyTwitter.

I was hesitant initially to spend any money on a mobile Twitter client for my smartphone, because I’ve been able to extract perfectly good functionality from free desktop clients. However, I can tell you that the $10 asking price for Gravity is well worth the price of admission.

The interface is smooth and the feature list is impressively robust. The only hiccup that I encountered is that it would not always display my full friends list. I do have over 2000 followers and I follow about 1400 accounts, so Gravity may present some trouble for so-called Twitter power users. For the average user, however, this is everything you’d want in a native S60 Twitter client.

On a side note, the Gorillamobile for iPhone giveaway ends this Friday, so be sure to follow @MobileMag and @MichaelKwan and send out the contest-entering tweet in the giveaway post before then if you want to win.