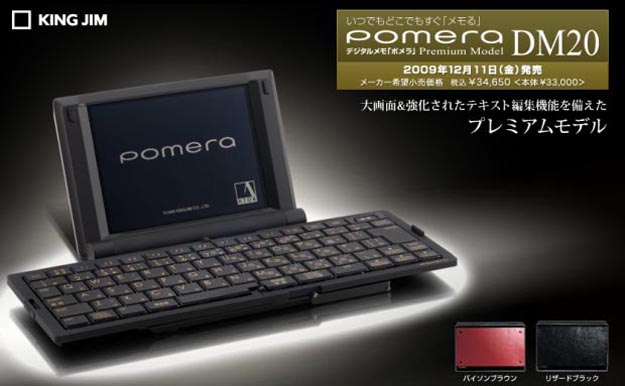 Not to be confused with American cousin Slim Jim, King Jim of Japan is coming with a rather unique product. The Pomera DM20 is about the same size as a standard UMPC, but it comes with a flip-out QWERTY keyboard to ease your typing experience. So, it should act like a netbook then, right? Not exactly.

Despite what its form factor may lead you to believe, the King Jim Pomera DM20 does not offer you the abiilty to watch movies, listen to music, or surf the web. It does not have any web access, gaming capabilities, or even a color screen.

What is it then? As it turns out the Pomera DM20 is just a notebook. No, I do not mean like a laptop; I mean like a notepad for jotting down some quite snippets of text. It only has a 5-inch VGA resolution monchrome display to boot.

Other specs include the 89MB of internal memory, microSD/SDHC expansion slot, USB port, and Japanese cell phone connectivity. Given its less than steller features, you’d think that the Pomera would be cheap and you’d think wrong. Look for it to sell starting December 11 for $380. Ouch.