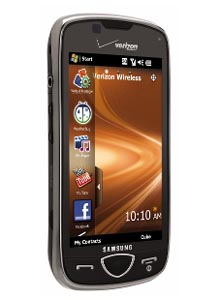 In the market for a new phone and not satisfied with the current offering of Windows Mobile handsets? The crew over at Samsung and Verizon just may have the ticket for you, because they’re about to set the Samsung Omnia II loose into the American wild as of next week. This is one hot touchscreen phone and Verizon customers should get pretty excited about it.

My friend actually has the GSM version of this phone and he couldn’t be happier with the implementation of the Samsung TouchWiz interface. This user interface is built on top of the Windows Mobile 6.5 frame, but you don’t see much of the WinMo stuff until you really dive into the guts of the phone.

Going through the specs, you get a 3.7-inch WVGA AMOLED touchscreen, an autofocus 5-megapixel camera with dual-LED flash, GPS navigation, and Wi-Fi connectivity. I wouldn’t quite say that it’s an iPhone killer, but it may be a suitable alternative for the VZW crew.

Look for big red to launch the Samsung Omnia II (i920) on December 2. The pricing is expected to be in the $199.99 range with a two-year contract and a mail-in rebate.