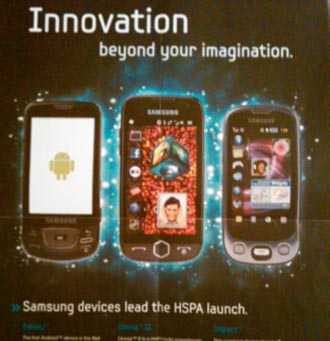 If you turn your attention over to Rogers Wireless, you may be attracted to the HTC Magic. Turning over to Telus, your eyes may sway toward the HTC Hero. What about Bell? Where do you find your Google Android fix through the third of the big three in Canada? Simple. You turn to the Samsung Galaxy.

The rumors have been swirling around for some time, but now we’re seeing something a little more official and substantial about this phone’s pending release. Shown here is a poster that has been spotted at several Bell locations across the country. In addition to the Omnia II (center) and the Impact (right), we see the Samsung Galaxy.

This represents the first Android device in the Bell lineup and it’s the thinnest Android device available in the market today. You get loaded up with an “advanced” 3.2-inch AMOLED touchscreen, the full slate of real-time Google apps, and the inclusion of Google Talk to keep “the conversation going.”

There’s no word on pricing or any kind of release schedule yet, but since the poster makes explicit mention of leading the HSPA launch, I’m thinking that Samsung will push the Gravity onto Bell’s shelves sooner rather than later.