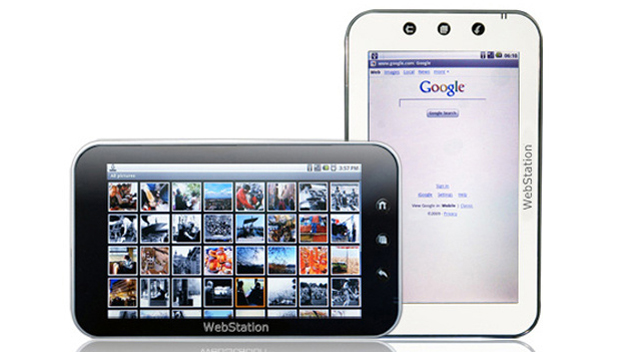 Google Android isn’t just for smartphones, you know. We’ve already seen some companies attempt to port the mobile operating system into a netbook form and now we’re getting an Android-powered take on what a Mac Tablet might look like. Except, you know, it’s wrapped all up in Google goodness.

It’s not like the Camangi WebStation is entirely new, since it’s been making its rounds in the rumor mills for a few months, but now we’re starting to get a look at the real thing. This is a 7-inch tablet, so you get a big touchscreen and a virtual on-screen keyboard.

The device gets loaded up with the Google Android 1.5 treatment and the 7-inch glass touchscreen display has a resolution of 800×480 pixels. Other features include integrated 802.11b/g Wi-Fi, GPS, microSD slot, 2-megapixel camera, secondary VGA webcam, and a USB port that could be used to add 3G connectivity.

There’s word on the street that the Camangi WebStation will be ready for a retail release next month and they’re shooting for a $400 price point. That seems more than reasonable, considering that you’d spend about the same on a smartphone or netbook.