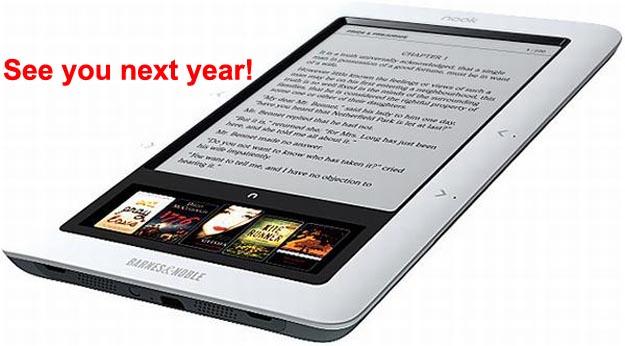 You see? This is why it pays to get your holiday shopping done early. Right when the Barnes & Noble Nook was announced late last month, we had a good feeling that it’d be a hot seller among Christmas shoppers. A couple of weeks ago, we learned that it was more popular than expected. Well, this popularity has pushed the ebook reader over the edge.

There have been way more pre-orders for the device than Barnes & Noble anticipated, so the company is not able to keep up with the demand. We originally heard that it would be ready late this month or early next month. The release date then got pushed to December 11. And now it seems that you may have to take a Tickle-Me-Elmo approach if you want one within the current calendar year.

Barnes & Noble has announced that it has sold out of its initial supply of devices and the next shipment won’t be ready until the week of January 4, 2010 at the earliest. People who have already placed pre-orders should (hopefully) get one in time for the holidays, but the rest of us are out of luck.

This may sound like a “good problem to have” for the folks at B&N, but it’s even better news for Amazon. If buyers can’t get their hands on the Nook, they’ll shift their gaze over to the Kindle instead. An Amazon rep has gone on the record saying that the latest gen Kindle, released in October, is “in stock and available for immediate shipment today.”