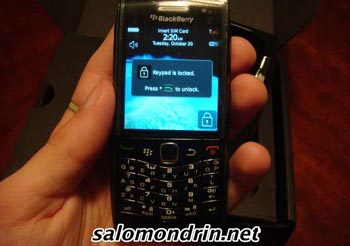 It’s easy to get excited over the newest entries in the BlackBerry line of smartphones, but there has been a definite focus as of late on the QWERTY devices and on the touchscreen Storm line. What about SureType and the trusty old Pearl candybar? Some people want the full Berry experience in a more compact form factor, after all.

It seems like those prayers are about to get answered, because here is the BlackBerry Pearl 9100. Also known as the BlackBerry Striker or the BlackBerry Status, this seems to be the newest phone in the Pearl lineup, but it won’t have the trackball from which the original Pearl derived its namesake.

In place of the trackball is the new trackpad that seems to be infiltrating the rest of the BlackBerry line. The features on this RIM prototype are said to include 3G connectivity, BlackBerry OS 5.0, integrated Wi-F, BlackBerry 9700-like styling, and the characteristic SureType keyboard.

Seeing how we already have the BlackBerry Pearl Flip 8230, should we be expecting a flipping variant on the Pearl 9100 at some point in the near future? How about a vertical slider like the Palm Pre?

There was a video, but it has since been removed from YouTube.