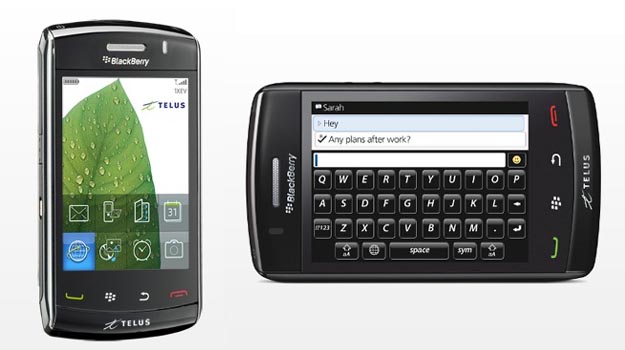 Did you like the first BlackBerry Storm from Telus? Maybe you’d be more interested in its successor, the appropriately named BlackBerry Storm2 9550. Telus Mobility has officially launched his upgraded smartphone and it comes with just about everything that you’re expecting.

I remember when the Storm2 was little more than a rumor and people were saying that Research in Motion would get rid of the SurePress technology for the second iteration. It turns out that these people are wrong, because the BlackBerry Storm 2 9550 is indeed equipped with a 3.25-inch clickable touchscreen.

Other highlights include full access to the BlackBerry App World, a virtual QWERTY keyboard, 3.2 megapixel camera, Wi-Fi connectivity, a pre-installed Facebook application, and the usual suite of RIM productivity software.

The BlackBerry Storm2 9550 can be had at the special promotional price of $199.99. This requires a new three-year contract with a monthly voice and data plan of $50 or more. Go without a contract and it’ll run you $599.99. Considering that Telus is also home to the Apple iPhone 3GS and the HTC Hero, do you still want the touchscreen offering from BlackBerry?