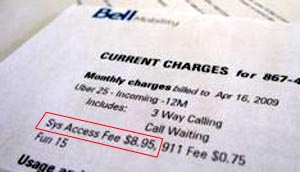 The whole System Access Fee (SAF) thing has always been a sore spot for Canadians. It was originally introduced to help carriers recoup the cost of building up their networks, but now it is largely perceived as an unfair cash grab. Thankfully, we could be slicing the final head off this hideous three-headed beast.

Well, sort of. As you know, secondary brands like Fido and Koodo already lack system access fees. Rogers Wireless eventually followed suit, but it replaced it with a Government Regulatory Recovery Fee (GRRF). Telus Mobility axed its SAF and introduced “Clear Choice” plans that have the charge integrated. Bell Mobility has now announced that it is following suit.

Starting November 20, Bell Mobility will have a new lineup of postpaid plans that will no longer come with the $6.95 monthly system access fee. By the sound of things, the new Bell plans will be similar to the Telus ones, integrating what was once the SAF into the advertised price. There is no mention of a GRRF-like addition.

My best guess is that Bell Mobility will be taking on a similar policy as Rogers and Telus when it comes to existing customers. You can be grandfathered into your current plan and continue to pay the SAF or you can migrate over to a new plan and get rid of the SAF.