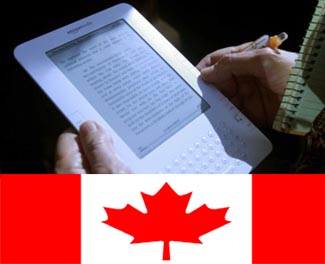 The original Amazon Kindle only worked within the United States and then we were introduced to the Kindle US & International Wireless edition for some foreign roaming. Unfortunately, you still needed to be in the United States to get it. That has now changed. Canada, as well as several other countries around the world, can now order the Amazon Kindle like any full-blooded American.

The announcement came this morning that the Amazon Kindle (but not the larger Kindle DX?) will ship to a number of international destinations. Just like the iPhone, Canadians are a little late to the Kindle party, but at least we have arrived.

My gut instinct told me that the Canada-friendly version of the Kindle was just a variant on the Kindle US & International Wireless edition, meaning that we’d be on the hook for extra charges if we were to buy or download something outside the United States. However, based on a quick look at the official page, this does not appear to be the case. No extra charges.

The Kindle Global Wireless edition gets a 6-inch diagonal e-ink display, enough storage for about 1500 books, 3G wireless connectivity (you can check the coverage map on the Amazon page), text-to-speech, and Whispersync technology.

Thus far, it seems like Canadians will need to head to the American Amazon site to order the Kindle (US$259), but I’m thinking that it’ll pop up on Amazon.ca soon enough.