The world of Google Android is already getting more interesting with the Motorola Droid and the HTC Hero, but Sony Ericsson’s entry could make things even more fascinating. Earlier this month, we learned that the Rachael would be officially called the Sony Ericsson XPERIA X10 and now we’re learning about the official launch date.

Initially, we were told that this phone would be ready for market some time in 2010. It was then narrowed down to some point in the first quarter, but the official website is now showing that the XPERIA X10 will be released in February 2010. That’s only three months away!

As a quick refresher, you get a four-inch WVGA touchscreen, tri-band HSPA, an 8.1 megapixel camera, and that super fast 1GHz Qualcomm Snapdragon processor. The camera also comes with smile detection, touch focus, and send to web.

So, now that we know its name and we have a reasonable grasp on its release date, we want to find out how much it will cost. There’s no official announcement on that front just yet, but the premium handset is expected to be in the $600-$700 range. 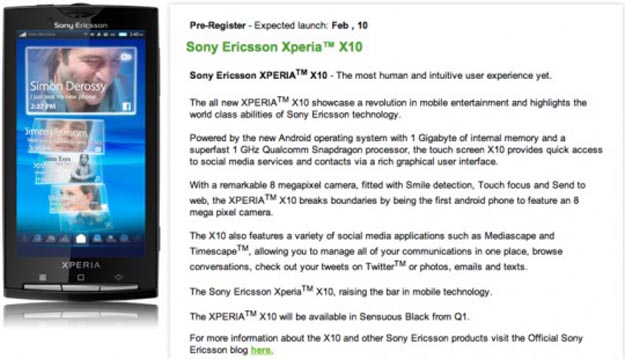