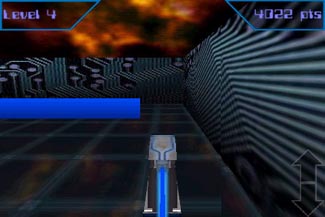 I think most people use their cell phones for so much more than just voice calls and text messages. Mobile gaming is bigger than ever and it seems that the Google Android platform has a fun little addition to consider in the form of Light Racer 3D.

There is a very definite Tron-like feel to how this game looks. You can see the weird motherboard-like futuristic graphics and some sort of funky motorcycle-like vehicle that leaves behind streaks of light.

In the game of Snake, first made popular on early Nokia handsets, you gobble up dots and the trail left behind by the snake gets longer. The same kind of idea happens here, except you are facing an opponent and you’re trying to get them to crash into your stream of light. At the same time, you have to avoid the same trail of light, as well as walls and other obstacles.

The action is remarkably simple — all you have to manage is turning left or right — but it looks like it can be incredibly fast-paced as well. Breakneck even.

It would have been nice to get some prettier graphics, but this looks like a great time-killer for all the Android fans in the audience. Find it in Android Market.