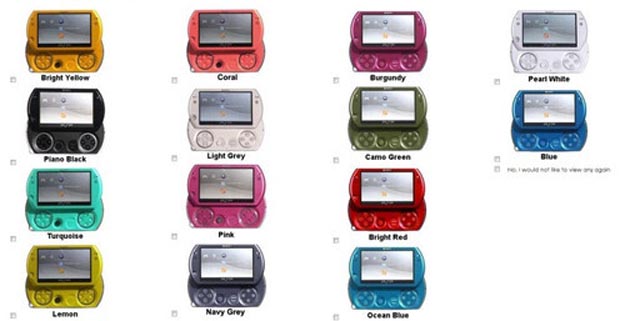 When I was over at the E3 Expo in June, I had the opportunity to go hands on with the new Sony PSPgo. They said that it would not completely replace the existing PSP, since it did not have a UMD drive and it catered to a slightly different market.

While the Sony PSPgo has only been out for a very short time, it seems that Sony is already itching to refresh the line with a splash of color. A UK market research company recently approached a number of individuals to see if they would be interested in a new color of PSPgo, asking which one they would most likely want to buy.

For the record, the PSPgo is currently available in only the monochromatic options of black or white, so it wouldn’t hurt to have a few more color options thrown into the mix. It is a little disconcerting, however, that Sony is seemingly looking for new ways to bump up sales already. Is the PSPgo really performing that badly?

Looking at the image embedded here, I think the camo green could be a good tie-in to some army-related title and the ocean blue could be pretty popular on its own. The lemon and turquoise hurt my eyes a little though.