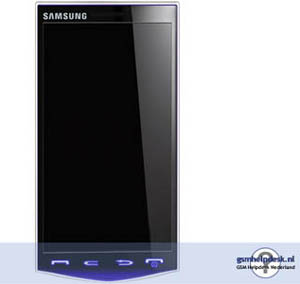 Looks like I’ve got some good news and some bad news for all the Samsung fans in the audience. Remember how Samsung announced its new bada mobile OS earlier this week and how they were planning on equipping some handsets with the new platform? Well, it seems like we’re getting our first glimpse at the first smartphone to use the bada operating system.

That’s the good news and you can see the phone right here. It seems like it’s playing par for the course in terms of design, perhaps competing against devices like the HTC HD2 or even the Apple iPhone. I see a big touchscreen, a small number of hardware buttons, and some mildly rigid corners. I can’t say for sure, but it looks like it has that “Touch of Color” theme that Samsung uses for its LCD monitors and HDTVs too.

The bad news? The leaked picture does nothing to show us what the bada OS is all about. The phone picture has just a plain black screen, so we have no idea what the platform will feel like in comparison to Android or Windows Mobile. We’ll have to sit tight on that front.

On a side note, Samsung says that the development of bada will not impede the company’s usage of other smartphone platforms. As such, we may continue to see new Samsung phones with Symbian, Windows Mobile, and Android in the future, as well as bada.