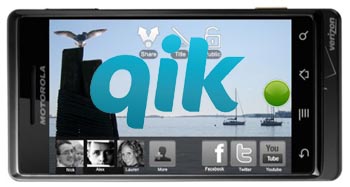 Qik is a pretty nifty service and it is available on the vast majority of smartphones, but it seems that the new Motorola Droid is the best candidate for the live-streaming service. Unlike other phones that get stuck with less than desirable resolutions, the Droid can do Qik at up to a widescreen DVD resolution.

This isn’t quite the same as getting any sort of high-definition, per se, but it is a significant step up from what other phones in this realm are able to do with Qik.

After downloading the (free) app for the Droid phone through Android Market, you’ll be able to capture videos at a 720×480 pixel resolution. The company says that it’s the first live mobile provider to enable DVD-quality video capture.

With the inevitable comparison to the iPhone, the Droid has to win on the Qik front. Not only can it do streaming at DVD resolution, it can stream. As you may recall, the Qik app for the iPhone only lets you record and upload later; it doesn’t do live streaming.

Check out the sample vid below of the Droid Qik app in action. Looks good!