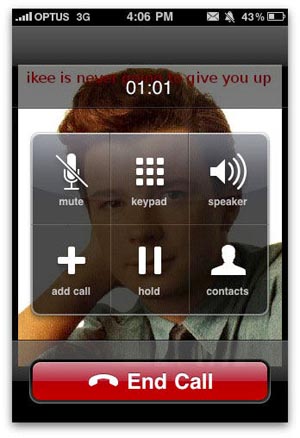 People will tell you that there are all sorts of risks when it comes to jailbreaking your iPhone, but you also gain access to all sorts of things that you wouldn’t be able to get otherwise. Well, what they didn’t tell you is that jailbreaking could lead to someone never giving you up and never letting you down.

As it turns out, the iPhone has been hit with a worm for the first time. The good news is that the worm’s creator, a 21-year-old student from Sydney, is saying that the “virus itself is not malicious and is not out to hurt people. It’s just poking fun.”

Instead, what it does is take over the home screen wallpaper, replacing it with Rick Astley. I did not hear if he takes over your ringtone too with his one hit wonder, so I don’t think he completely Rick Rolls you in that respect.

So, how can you overcome this iPhone worm? How can you prevent its infection? Simple.

After you’ve done your jailbreaking on the iPhone, how about changing that default password? This can be done in Cydia via the MobileTerminal app. Enter the “passwd” command to change it.