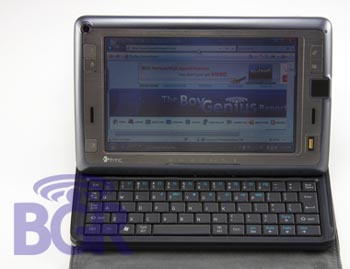 Even before the original Asus Eee PC hit the scene a couple of years ago, the concept of a netbook had already existed through a series of handheld computers. There were devices that were slightly bigger than PDAs and HTC wanted a piece of the pie. Unfortunately, devices like the HTC Advantage and HTC Shift didn’t exactly go their way.

Well, the netbook market is hotter than ever today with just about every manufacturer jumping on board. You can find your favorite take on the mini-laptop form factor from Toshiba, HP, Dell, Acer, and more. With the Nokia Booklet 3G just around the corner, we’re also seeing that traditional cell phone companies can do netbooks too.

As a result, HTC head-honcho Peter Chou says that the Taiwanese firm is very much interested in building a netbook of some kind. They’ll have to learn from what made the HTC Shift less than a stellar success and capitalize on what consumers want today. Chou says that the HTC offering will be unique in some way, but didn’t say which direction they were considering. An Android or Chrome-based unit, perhaps?

HTC seems to be doing quite well for itself again, thanks to its heavy involvement in the international market with devices like the HTC Hero, HTC Touch Pro 2, HTC Touch HD2, T-Mobile myTouch 3G, and so much more. Would you buy an HTC netbook?