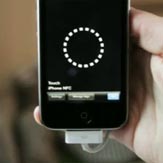 The first Apple iPhone introduced us to the platform and brought touchscreen handsets to the forefront. The iPhone 3G stepped it up with the App Store and the iPhone 3GS made things faster. What can we expect from the iPhone 4G? It seems that the 2010 edition could have RFID.

This latest rumor comes byu way of Near Field Communications World. A “highly reliable source” is saying that he’s seen iPhone prototypes with an embedded RFID reader and he’s even seen it in action. This usage of near-field communication could be the next major innovation for mainstream mobile phones.

What sort of applications can we expect from this? Based on the demo video below, you can tap your iPhone next to a variety of RFID-equipped toys to get related content. Just as we weren’t sure where the App Store would go, we can’t be sure what will become of RFID implementation.

What we do know with some certainty is that if Apple does indeed go through with an RFID-reading iPhone, you can fully expect the rest of the cell phone industry to follow suit shortly afterward.

On a side note, how do you guys say RFID when you talk about it in real life? I’ve always just said the individual letters (arr-eff-eye-dee), but I’ve been hearing more than more people say it as if it were a word (arr-fidd). Isn’t that like saying HSPA as hiss-pah?