As I was poking around in the weekly flyer from Future Shop, I saw something that just might be fantastic news for all the Google Android fans in Canada. Want to get the ‘droid, but don’t want to break the bank? You might want to head over to Future Shop to grab your HTC Magic smartphone, since they’re selling it for $0.00.

You can probably figure out the catch. In order to get your hands on teh touchscreen-only HTC Magic, you’ll need to latch onto a new three-year service agreement with Rogers Wireless and you probably need a data plan to qualify for that price too.

In case you didn’t catch it the first few times around, the HTC Magic smartphone gets a 528MHz processor, a 3.2-inch touchscreen display, microSD expansion, 3.2-megapixel camera, GPS with Google Maps, Bluetooth 2.0+EDR, and integrated WiFi.

Yes, I know it’s not the Motorola Droid. It’s not the HTC Hero either, but the HTC Magic still seems like a pretty solid offering. Interestingly enough, I only see the $0 price point in the flyer. Looking at the product page itself, the phone is still listed at $79.99 with contract. 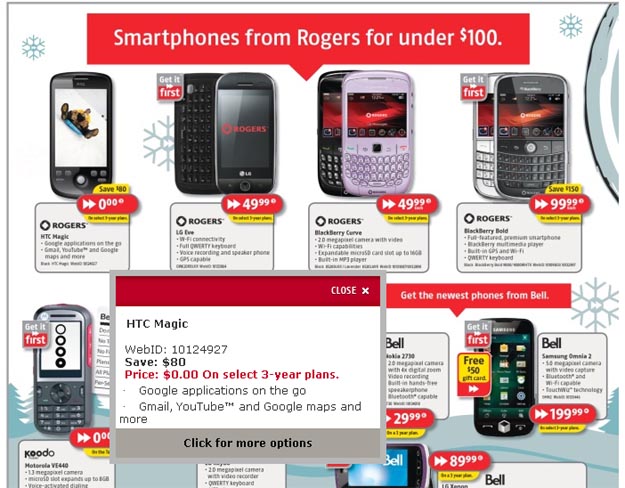