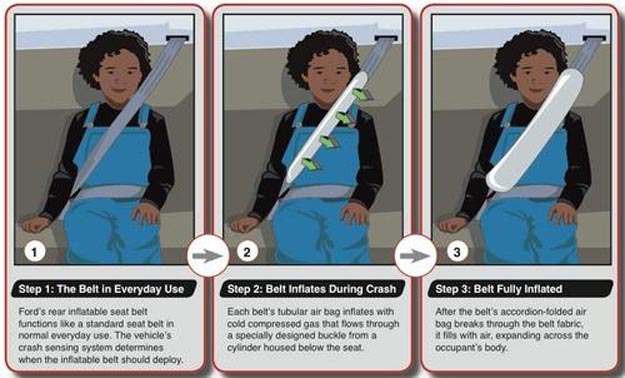 There are all sorts of ways that the automotive industry can make our daily journeys a little safer. Over the years, we’ve seen the advent of sideview mirrors, backup cameras, and all sorts of other doohickeys. The original implementation of airbags was a major revolution too, and now Ford is taking it to the next level.

Originally, we would only see an airbag deployed out of the steering wheel to protect the driver. Then, we started to see airbags being implemented to protect the passenger in the front seat. And then they started adding side curtain airbags. The thing with all of these is that the person in the car goes flying into these bags of air.

With the upcoming Ford Explorer, the blue oval is taking a different approach. For the back seat, instead of having an airbag come down and fill the space between the back of the front seat and the rear seat passenger, the seatbelt itself will inflate.

This seatbelt-mounted airbag is not there to absorb the impact of an accident, softening the blow of a head cracking up against the back of a seat. Instead, it’s there to multiply the surface area of the belt (by five times) and thus make for a more comfortable experience. Ford says this will reduce head, neck, and chest injuries.

The biggest problem with this “innovation” is not its design, but the very fact that only 61% of Americans wear seatbelts while in the back seat. You gotta wear it for it to work, right?